Nowadays, men’s tuxedo is a symbol of elegance and grace. Perhaps no other outfit can be compared with it in terms of solemnity. It’s nothing to be surprised at because a man’s tuxedo is part of the Black Tie evening dress code, which implies a black bow-tie, shiny lapels, trousers with stripes, and a white shirt. In a word, what is meant here is a tuxedo. Tuxedos are single-breasted like jackets, and only the top button is fastened or they could be double-breasted with a standard arrangement of fasteners. And if now it is considered to be a high fashion, and then back at the beginning of the last century, a man who appeared in a tuxedo at an official event was subjected to general criticism. 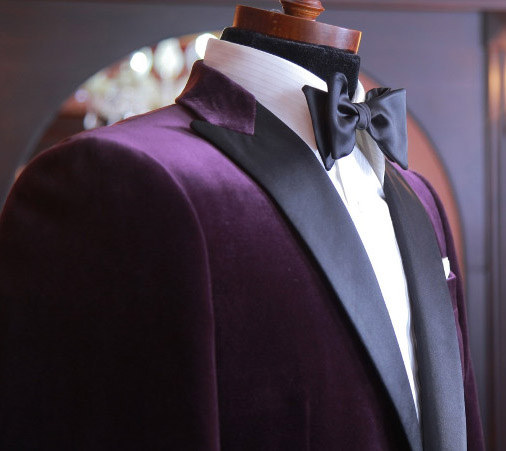 The fact is that in England the tailcoat was always considered a kind of classic formal male attire. It was worn only by representatives of high society. The male tuxedo in its original form was more like a bathrobe.

It all started with tobacco. Smoking gained popularity back in the 17th century and since has become a fashionable activity among the aristocracy. In order not to embarrass women, smokers retreated to special rooms, took off their evening dresses and put on a tuxedo jacket. Thus, modern men’s garment nowadays considered to be elegant was once a kind of work clothes.

The convenience of the men’s tuxedo was that it had wide satin lapels, from which it was convenient to shake off the ashes from a cigarette. Besides, the clothes had a thick comfortable lining so that the smell of smoke was not absorbed into the fabric. Upon completion, the gentlemen put on tailcoats again. Over time, a tuxedo began to be worn at men’s meetings in clubs.

1865 can be called the first official date in the history of the formation of such a jacket when a tailor-made tuxedo for the future King Edward VII. The monarch’s entourage appreciated the invention, and soon the beau monde joined its sovereign.

That is another story about how a tuxedo for men gained popularity in America. The American James Potter was honored to be presented to the king, and it was he who, seeing the outfit, delivered information about it across the ocean. These rumors reached one billionaire who bought a men’s tuxedo for a party at the prestigious Tuxedo Golf Club, New York. It is difficult to imagine better advertising, and since then, the American rich also began to put on jackets with silk lapels.

Before you buy a men’s tuxedo in Kyiv or order in any other city, familiarize yourself with the basic properties that distinguish it from jackets.

A word on quality

You have already guessed that a tuxedo is always about exclusivity. Since it is intended for exceptional cases, it is better to take care of its quality. One can talk about reliability for a long time. For that matter fabrics of world leaders in the field of textiles are used for sewing the best men`s evening wear. For example, it is Scabal material with a Super 200 mark (quality index). Gold threads, as well as the best raw material – the most expensive vicuna wool in the world, are used. Sometimes diamond dust is also available.

Everything is clear with the quality – for exclusive clothing only exclusive material. However, if you buy a man’s tuxedo in Kyiv and the size doesn’t suit you, then your fashionable image risks turning into rags. Every detail is important here. If one chooses a wrong combination of something then all the matching rules will fail to comply with. Moreover, a tuxedo should fit you, and not be too loose. The tailor creates an individual pattern that reproduces every inflection of the body. Hand sewing guarantees attentiveness to each stitch. Besides, the owner’s name embroidered on the label will become the icing on the cake.